Information and resources for the transition
from shedding to infiltrating stormwater

Video of a 2.5" storm on Jan 31st, 2016, which included a 3 inch/ hour burst for 15 min. That's a 10 year storm; the biggest of the season.
The video has synchronized time lapse of the inlet, storm radar, gutter cam, and graphs of rainfall intensity, gpm of rain income, run-on from roof, road, and hillside, infiltration and the mere trace of runoff. Yes, this took forever to dial in. The water income peaked at 1500 gpm, infiltration at about 1000 gpm (!). We infiltrated about 67,000 gallons in six hours…equal to 9 months consumption for the house. The whole thing was pretty amazing. I had high expectations and the performance exceeded them. Learned a lot about best practices for stormwater infiltration. Check it out:

(please subscribe to our channel, "like" and share this video; that will help enable us to keep producing original designs and content...or purchase the full version)

Optimizing stormwater management is the perfect gateway for government systems thinking and collaboration across numerous departments (for more on this see the Event Handout).

This was a demonstration of the under-appreciated potential for small-scale, distributed catchment in developed areas to:

The demonstration was attended by 30 professionals including our state congressional delegation, the heads of several local water-related agencies, local non-profits, educators and students.

The hydrograph for the most intense rainfall in the Flood Control Historical record for our area (1.2" in 15 minutes), on December 11th 2014. The expected recurrence interval based on pre-climate change patterns is once every 400 years. Vertical axis is inches per five minute interval.

Water at 177 gpm fills the first three terraces, then overflows with a two-second surge of 2000± gpm.
1240 gallons in 7 minutes only wet the first 15% of the infiltration basins. (Note: this makes 2000 gallons we've added to this small area in a week and there is still no moisture in the monitoring wells twenty feet away and 8 feet deep, indicating that the water is going down rather than sideways.)

Later, in the rain--

Home water budget before/ after water makeover, impacts on water and climate commons (excerpt from Create an Oasis with Grey Water (book)

The California Water Resources Control Board is currently soliciting feedback on their strategy to optimize the management of stormwater in California:

We suggest you e-mail Frances Spivy-Weber  at the SWRCB before Jan. 6th and ask that:
1) the SWRCB support the filling of data and best practice information gaps for simple, small scale groundwater recharge projects
2) investigate the potential benefits for development and statewide deployment of software tools to identify and prioritize stormwater management opportunities

An accurate mental model is the basis for good design...and the best way to improve a mental model is by direct observation of water systems, natural and man made. As soon as it starts raining, head outside and observe. Be sure to poke through the surface of the leaf litter and soil. Based in part on spending a month inside a fissured bedrock aquifer in Spain, I think that most of the recharge in such formations may come from a tiny % of the area where the water concentrates, is detained, and has a high perk pathway to get underground... 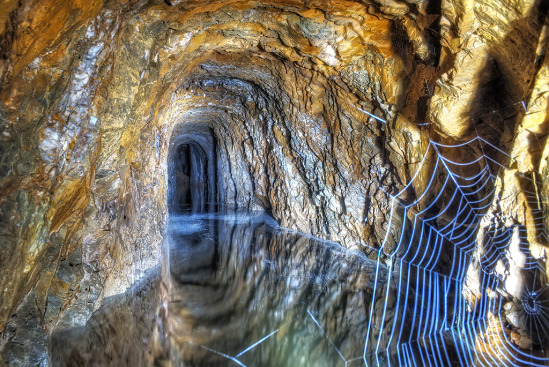 Most of the increase in groundwater flow due to medium rain from countless bedrock fissures in a 400 year old horizontal well that goes 500' into the mountainside was from just one fissure (The special fissure is behind the brick dam I made above).

Not many flow surges to see recently...except for the 56,000 gpm surge on the Santa Ynez we kayaked this August (!)

Stunning and surreal to see sad pond Cachuma with a pipe to pump the water over the spillway several stories above the water level…then kayak/ paddle board the river for miles on the release of a staggering quantity of crystal clear, warm drinking water…

Same day, below the dam. Note dead cattails…this was sun blasted dry rock a few weeks ago and probably a few weeks after...

Riverside wells were pumping full speed to get as much of the water as possible before it could reach the water rights holders downstream.

Elsewhere on the web... 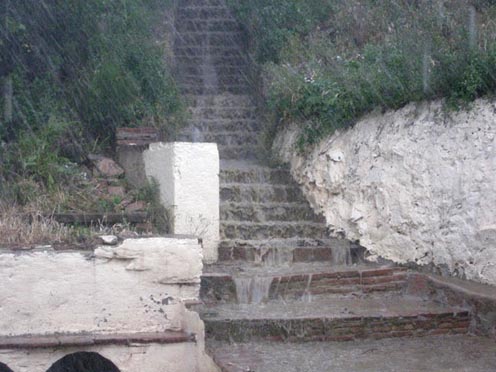 Stairs that double as channel to direct runoff to a 100,000 gallon cistern in Spain