I hope to see some of you at the long-awaited greywater workshop in New Mexico.

I think you'll enjoy the story below about kids knowing their forest. The experience certainly left me hopeful and smiling.

In my July 2003 visit to Maruata the focus was planting trees.

We planted approximately a hundred fruit trees in private orchards.

These were all irrigated by channels which we made to redirect washwater from fetid black pools to irrigation channels and basins. These dry out each day. Thus, they stay sweet smelling and don't breed mosquitos.

(A description of the greywater orchard project, including cool new photos of private orchards, a commercial orchard, and a public outdoor shower has been added to the Maruata pages).

We also planted a hundred and fifty native hardwood seedlings to form the living posts of a fence around the spring complex which supplies the community (a description of the spring projects was also added).

At the end of all this planting, the day before I left, there still was a fat handful of Koral seeds left. I was planning to use them for next year's project; a two kilometer long living fence around the entire watershed of the springs.

Suddenly, I had an inspiration: If we planted these now, even though they'd only cover a fraction of the fence length, we'd get to test the technique of growing posts first and adding wire later. We'd surly learn something highly useful for doing a better job on the rest of the circumference of the watershed.

I took off on my bike for the springs to try, gringo-like, to squeeze this achievement in last minute.

Unfortunately, there was not a single adult male in the valley of the springs. They were all off working.

I asked the women, but they shook their heads "no." Planting trees was not their work.

Some children, however, Juan jr. (about ten) and his seven year old brother and five year old sister we're interested in helping out. I rolled my eyes a bit, but what else could be done?

We headed up the spine of the ridge above their house, as I explained the specifications for the job.

These, I felt, were hopelessly beyond their understanding: The seeds were to be planted at points 50 centimeters apart, at the point where a line drawn at right angles from the watershed boundary dropped 30 vertical centimeters below that boundary.

Problem was, if we planted them on the boundary, the trail which would inevitably form just outside the fence could channel a torrent of concentrated, feces-laden runoff to the inside of the watershed just as easily as the outside. If we planted an arbitrary distance outside the fence, say two meters, in flattish areas this would only be a few centimeters below the boundary and we'd still have the possibility of trail runoff entering the spring watershed. Also, where the watershed boundary was a knife edge ridge, the trail would be pushed by the fence into the abyss. (Lest I seem overly pessimistic about the children's mental capacities, bear in mind that no adult in the village knew what the word "watershed" meant. What's more, the ridge was braided with interlaced, rutted trails, making it quite difficult to discern the true boundary where the water would divide).

As I was fumbling around, simultaneously figuring this out and trying to explain it, Juan Jr., predictably, looked at me blankly, as if he had no idea what I was doing.

His problem, however, turned out to be that he didn't understand why I was attempting this without proper tools. He politely excused himself and returned with two corn planting sticks; stout hardwood poles with forged metal points, as ideally suited for planting trees on this rocky terrain as for doing the same with corn. 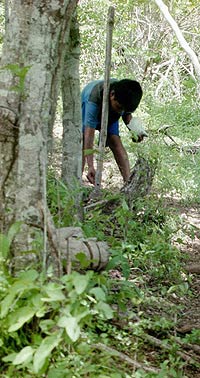 It soon became evident that he fully grasped the spec for the location of the trees.

Delighted by the windfall of a somewhat capable helper, I took off with him about a quarter mile up the steep, thickly forested ridge, marking existing trees which happened to be in the future fence line. My idea was that I could potentially leave him to plant in-between the marks, while I ran down and checked up on the watering of the seedlings around the springs.

When we got to the top, he said I could leave him there and he'd plant his way back down.

I admired the zealous striving for efficiency behind this request, but pointed out that this couldn't possibly work, as the marks were all on the downhill side of the trees. To underline my point, I gestured at the hopeless thicket of similar trunks stretching out below us, not a mark visible.

"Uh-huh. So which is the first one, then?" I queried, from my point of advantage, some fifteen feet downhill, where I was able to see one mark on a tree between us.

"This one?" I say, pointing at a nearly identical, but markless trunk one foot away.

"No. The one by your elbow" (which was correct.) He then went on to explain, patiently, as if to a well-meaning but dimwitted child:

"I know all these trees. This is where I live. I walk this trail every day. I know which ones we marked."

Looking at the thicket, I found this difficult, if not impossible to believe. I doubt I could have identified any of them, except by chance. I wasn't going to risk a year's delay in the development of the trial section of the fence by letting him plant randomly.

So, I quizzed him about the next tree, and the next one, until he's almost out of sight a few hundred paces above me. He scores an astonishing 100%.

"I'll be damned," I muttered, as I ran down to check on the other stuff. When I get back, his team has planted all the way to the end of the marks and more. He regarded me and said:

"You know, these would grow much stronger if they were weeded a few times during the wet season."

"As many as are needed."

As we continued planting up the hill, I asked if he heard about proposing to the tribal assembly that this land be set aside as a watershed reserve, of no cutting and no grazing.

"Imagine coming here as an old man, when these posts are too thick to encircle with your arms, and remembering planting them as a kid. Imagine, if the reserve is respected that whole time, the difference between the forest on the inside of this fence and the outside. Imagine the difference in the springs."

We both smiled, the enormity of the possible consequences of this simple act of planting trees a comfortable weight settling into us.

Later, on the high ridge, when we'd planted ourselves out of seeds, and I turned to ride, then fly to California, he says:

"How about if I find some more seeds in the next few weeks, and keep planting?" 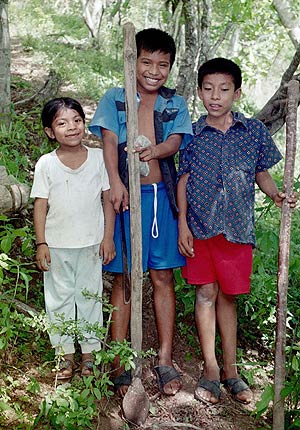 (Unsubscribe to the newsletter)