Principles of Ecological Design gives insight, inspiration, and guidance for a radical redesign of our way of life.
It illuminates a way to disengage from corporate consumer culture, and create a more fulfilling lifestyle. These principles are fundamental to any green building or ecological living initiative. 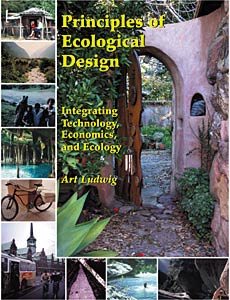 "This concise booklet is densely packed with information immensely helpful for a life close with nature. It is possibly the best book on alternative building in my fairly extensive library; I couldn't put it down."
-Bob Wilson, Wild Bounty Earthstead, Mount Shasta

"A powerful primer from a designer whose been living what he wries about—twenty five years of putting theory into practice. A voyage of discovery and live wisdom."
-Sim Van der Ryn, author Ecological Design

" The best written, most concise, eloquent instruction manual for lifestyle transfomation. If you're uneasy about your effect on the planet yet don't know what to do, here is your guidebook."
-Ianto Evan, co-author, The Hand-Sculpted House, Cob Cottage Company co-founder

"The books you wrote on greywater were very informative & straight-up, but it didn't reveal at all how radical you are..."
-The guerilla greywater grrls, Oakland, California

High resolution front and back covers for printing (PDF, 1mb)

The main obstacles to living with nature are cultural, not technical or economic.

...we do things not because they make social or economic sense, but simply because our society has been led to believe in them. The culture—the gut level idea of the right way to live—is a force which shapes desires and constrains the mainstream of society. In the West it determines, for example, what is thought to be “economically viable” at least as much as economics does.

What then determines the culture? Much of the American way of life has been designed by market forces.

Free market enthusiasts claim that no system is more effective for filling human needs. This is probably true. But a way of life designed with the goal of living best would be very different than one designed to maximize profit...

This book explains nothing less than how to redesign our way of life from the ground up, optimized for long term quality, not short term profitability.

Alternatives to the conventional score board for success

A wealthy American woman who does volunteer aid work in a village in Guatemala said she can only stand to be there for two weeks at a time because the Indians are “too damn happy.” That people living a dozen per dirt floored shack can find the happiness which eludes her “just becomes too confronting.”

Natural systems are always in dynamic balance with the whole. They serve to keep us connected, reminding us what is natural. Regular visits to more pristine wilderness deepens and broadens this connection, and anchors our souls against currents of cultural madness.

The context must be known in order to determine if a design is “good” or not.
There are no universal solutions. There are approaches and patterns that can be applied to generate the optimum solution in a variety of contexts.
Context is king in ecological design. In all cases the greatest efficiency—and performance as well—is achieved when the power of the tool is well-matched to the task at hand. Overkill is one of the saddest sources of waste in our society. Elimination of overkill does not mean sacrifice. The resources saved by using simple tools for easy tasks can be applied toward more difficult tasks. Using transportation as an example, walking would be used when adequate, bicycles for distances too long to walk, buses, trains, and carpooling for distances too long to bike or in bad weather, planes for speed or great distances.

By using a mix of transport modes instead of driving as much as average, my wife and I have saved about $180,000 in our 20 year driving lives—about what it cost to pay off our house.

Cleverly matching the power of the tool to the task at hand is cheaper, healthier, lower impact, and more enjoyable—yet ultimately more powerful than any single solution.

Moderate and efficient resource use

...Fossil fuels and electricity have severed the connection between energy source and consumer. One thin pair of wires can invisibly, silently channel an unbelievable amount of energy without creating a ripple of awareness. This has enabled our relationship with energy to skew way out of scale.

To put our energy use in a human, comprehensible perspective, try measuring it in units of energy slaves (es). If you shackled a very fit slave to an exercycle, they could generate about 75 watts of power, twelve hours a day. This is about what a bike rider expends cruising on flat land. To make the math easier, we’ll round it up generously to 100 watts = 1 Es This is a level of energy expenditure which an average American might be able to keep up for thirty minutes before collapsing. Now look around for energy slaves at work.

A Ford Expedition SUV—1700 energy slaves. Arranged on bikes four abreast (a bit wider than a standard ten foot road lane) and squeezed so there was just a few feet between the front wheel of one and the rear wheel of the next, the Ford Expedition would require a column of energy slaves nearly a mile long...

A great deal of energy and ingenuity has gone into hiding the supply and waste systems we use. Effective action follows awareness. Hiding certain things has caused an “unknowing,” and our morals have developed without critical knowledge. Those who gain from increased consumption have gained tremendously. All others, especially future generations, have lost.

Natural designs strive for moderation and awareness in the employment of energy slaves as well in the use of other resources.


Not too little, not too much: just enough

...voluntary poverty creates a safety net which precludes the worst excesses of modern life—by simply not having the money to fund wasteful ways of doing things, even if you are temporarily blinded into wanting them. Having money, on the other hand, means foregoing excess is only a matter of will.

Deficiency is stunting, excess is toxic and unbalancing. In most cases the optimal growth arises from just enough resources. This is true across a wide spectrum, from nutrition, to emotional needs, to national economies.

While green consumption is surely a slower path to ecological annihilation...Consuming less would be a far more effective step. In ecological design, you’re best off to:

Choose the most inherently simple solution, then implement it as well as possible.

Market economies favor the exact opposite: marketers seek out and push the fundamentally most expensive solutions, with the option of shoddy execution or financing if you want to save money up front. This yields the maximum profit and use of resources.

Because natural solutions are context sensitive, it is up to the people facing a situation to figure out what to do about it and how. Natural solutions are generally less idiot-proof than current common practice. They both demand and reward user interaction.

Ecological design places ultimate responsibility for implementing sensible solutions with local people who have knowledge of local conditions. Also, many of the systems themselves require independent thought from users on an ongoing basis.

More than any other feature, it is the interaction of the user with the design that enables ecological design to be so much more efficient.

For example, recycling requires more thought and action from people than if they put any solid they don’t want in the trash, and any liquid they’re done with down the drain. At least some user separation is key to tap the substantial economic and ecological advantages of recycling materials.

Many of the cycles in natural living environments are of such small scale that they can be maintained by a single individual.

The short feedback loops in natural living environments both suggest and reward ecological living. The reward is usually in the form of better performance, lower cost, and ever-increasing awareness. Compounded over the years, the savings and awareness facilitate a significantly better quality of life.

A ubiquitous but unspoken assumption in mainstream design is that the capacity of the system must almost never limit the user. This maximizes profits from sale and use of the system, and ensures that users will learn no conservative habits from the system.

Systems of moderate capacity tend to be cheaper and simpler to build, and to use less resources. What’s more, bumping into the limits of system capacity system provides useful feedback, which raises awareness and promotes good habits.

True progress actually solves problems. Most of what is commonly called “progress” is the relocation of problems out of sight in space or time.

It is wiser to add new ways alongside the old, rather than completely and immediately supplant them. By the time the problems of a new technology are recognized, reinstating old methods where they were superior is often not feasible: traditional knowledge has been lost, and/or the resources which the traditional approach requires have been appropriated for other uses.

The whole body changes in response to its environment. Head out into the wilderness and your skin browns and thickens, reaction to bug bites and poison oak lessens, your stomach shrinks, your feet toughen, your thyroid cranks the thermostat up or down to maintain comfort. At high elevation your lung capillarity and red blood cell count increase. Nerves in your cerebellum connect more intricately to perform all the calculations needed to keep your balance on rough terrain, your heart becomes slower and stronger.

Ecological design strikes a balance between short term comfort and long term comfort from a strong, adaptable, and adapted body. Shelter doesn't have to be so elaborate—and even the armchair feels better. 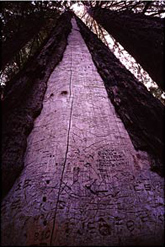 One aspect of the web of life is creatures eating each other. Another, making music together: finding and refining our part in this incredible, ever-unfolding, multimedia symphony.

This is part one of an expanded and revised web edition of Living with Nature, originally published in 1989 and currently out of print. Check back for the other sections, scheduled for later release.

You can download files (or have them e mailed to you) immediately after processing your order.

All files have a 30 day unconditional money back guarantee. If you are not satisfied with the file for any reason, just let us know and your credit charge will be refunded in full (there is no shipping/handling for downloads).